The Last Song By Nicholas Sparks 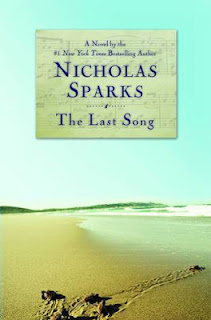 Ronnie and her brother are sent to North Carolina to spend the summer with their dad. After their parents divorce Ronnie had since then been estranged from her dad, never wanting to receive his letters or answer his calls. So when their mom sends them to live with him Ronnie tries everything to convince her mom not to take her. But her mom insists that they need to spend time with him. But even if she does go that doesn't mean she will spend any time with him, just the opposite she is going to try everything she can to avoid him. As soon as she starts feeling betrayed by her new friend the only person who helps her through it is her dad. Soon after she falls in love with Will a guy she would never see herself dating but he makes her happy. But her happiness doesn't last very long when she finds out the reason why her father wanted them for the summer. Not only will she regret not answering his calls but she will also regret not spending more time with him.


It was hard trying to read this book not because it was slow or anything but because it was a heartbreaking story. At first I was very unhappy with Ronnie's character I found her a bit whiny, and very immature. Like oh gosh she was just horrible in the beginning. She did have those moments when she was sweet but at times she was a pain. But throughout the book she matures as soon as she starts getting along more with her dad she does accept the fact that she was wrong for all the hurtful things she said to him. But in the end her character grew on me and I ended up understanding her. Steve her dad I loved him so much. He was very patient with her and he gave her all the time she needed, cause he knew that sooner or later she was going to come around. And that must have been tough considering how she acted. He was so sweet and understanding, and a tough guy. And Jonah was a sweetheart I adored him. It was harder on him going through what happened in the last couple of chapters. He loved his sister so much and she cared about him. He was just so adorable. I really really like this book I will be re-reading it soon. So if you guys are going to read it I recommend you go out and buy a box of tissues, Cause your going to need them.

I have not watched the movie yet. I know the movie was made before Nicholas even started writing the book, but I don't think I would watch it anytime soon. I'm just not a fan of Miley Cyrus. But if I ever do I will compare them both.
Posted by ana at 6:01 AM