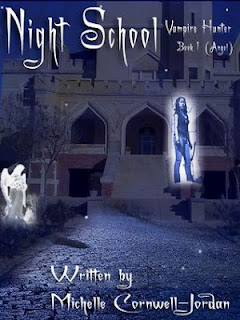 This book was given to me for an honest review here it is :)

Dasheen Bellamy and her younger brother jordan start attending Ame Academy after her parents disappearance. Dasheen tells the story about the school and its secrets. And re-tells the events that happened the night prior to her parents disappearance, all she can remember is that she was seeing things a little girl with no eyes and worms, she was found sitting in a corner of the room covered in blood. No bodies were found and since the police couldn't find the source of the blood they decided to let her go after questioning. Now she has to talk with the counselor about strange visions she started having before her parents vanished. And when the principal tells her that Jordan has been put into the night classes then she decides that she will join him to figure out why he hadn't told her and what is going on with him. She finds out that vampires are real and they tell her that she is not who she thinks she is, she is something more.

Dasheen was an awesome character, I can't even explain how much I enjoyed reading about her. She is this confident girl who doesn't care about rumors, someone who won't let anything get to her and she can definitely put up a good fight. I wanted to learn more about Jordan and what was happening to him cause he seemed different each time he was brought up in the book. I wanted to get to know him more and know what he was thinking. I want to know his side of the story. I also wanted to know more about the visions Dasheen had and why she was having them including the ones that she had about the mystery guy that was coming.

This book was not what I had expected at all, most of it was written as a blog, a re-telling of the past all put together. It was different in such a good way. I didn't find anything wrong with it just that I wished it could have been longer. This was such a fast paced book in the end I felt like I only read 20 pages it felt short. I can't wait to read the next book in the series its going to be good!!
Posted by ana at 7:42 PM