A Walk To Remember By Nicholas Sparks 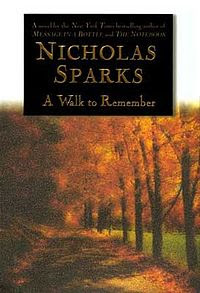 Jamie the daughter of a minister, always kept to herself. Until one day she decides to convince Landon the schools bad boy to enter a play with her. Spending so much time with him only causes her to start having feelings for him, and before they know it they are both deeply in love. But deep down Jaime knows that their love is only going to bring hurt into their lives. Because she is keeping a terrible secret from him, a secret that will change their lives forever.

Jamie was such an excellent character, even after after everything that she had to go through she was always happy, and helping others. She didn't want to act like she was dying like there would be no tomorrow for her. The happiness that she felt was enough for her. She got strength from all the love that Landon and her dad gave her. It helped her live longer. I really liked Landon although there were times when he was really rude and he did things without thinking but once he started hanging out with Jamie more and getting to know her he actually matured and changed. So that was something that I really liked. There were many times when I just broke down I couldn't help it this book was sad but it was also such a beautiful book. I really enjoyed it. Nicholas Sparks always has a way of making you cry while reading his books he is just a wonderful author.

The movie was actually quite moving also. They did a great job although they did change 30% of the stuff that was in the book but comparing them together I personally think that they are about the same. The changes in the movie were not that huge. So I definitely recommend this book its beautiful trust me.
Posted by ana at 6:19 AM