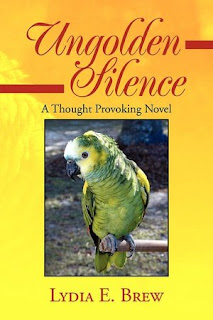 My synopsis:
The story is about Beatrice and Elaine, they both go off on a business trip to Washington, D.C they have started working on a Campaign about awareness for those who are disabled. While they are there it turns Beatrice's life into a nightmare, someone who was working with them on the campaign has been harassing her. She thought that by telling the man to stop what he was doing, that it would be enough but she doesn't expect what happens next.

Ungolden Silence really opened my eyes about rape, it is such a horrible crime. Which people need to learn about and they need to know what to do about it and how to deal with it straight on. By reading this you will learn facts and you will also learn why people need to speak up if this has or ever happens to them.
It is a powerful that takes you into the world of rape and into the lives of the victims.

I was hesitant to start this book because I knew I was going to hate it not because of the story but because it had to do with rape. The story was amazing really well thought out and it kept you wanting to read and you learned a lot. Lydia really put a lot of effort and time into this book, you can tell right off the bat. She created an inspiring story, that also answered alot of your questions

I hated Mr. Paige he was the most horribly, disgusting person I've ever read in a book. The author really pulled it off with him. It kept you reading cause you wanted to find out what was going to happen to him. If he was going to end up in jail. You loved to hate him, he was the most disrespectful

And Beatrice I have no idea how she dealt with that the way she did, I was extremely amazed even though she had more than a couple breakdowns here and there but she was a true fighter. She was the kind of person you wouldn't mess around with because there were moments when I thought she could have beaten up her attacker. She was really strong even when she did feel disgusted of his presence.
Elaine really helped out Beatrice during her moments of shock, and throughout the pain. She was like the rock that Beatrice needed. And that was amazing thing about her. She was there even if no one asked her to be, she was extremely brave and she actually stood up to a monster like Mr. Paige. I don't know how she kept herself together. She was like the mom the whole time they were there. She watched over Beatrice put her to sleep, helped her out of bed, and got her away from Mr. Paige. She is an amazing character I loved her.

Shara stepped to the microphone and said "Good evening ladies and gentlemen. Attitudes must change if this problem is going to be solved. I went to Washington the second that I heard Beatrice had been raped. The firm had a limo for Elaine and Beatrice so that Elaine could be as independent as possible. When I got to Washington, the rape and the act that a "community leader" was accused of rape was a major story. The limo driver just knew that the lady was a hooker, and he was mad. Again, it was the victim's fault. This driver did not have the facts. Why didn't I set him straight? Well. I thought I had to protect Beatrice's privacy right?"

"NO, WRONG, ladies and gentlemen. This is what we are talking about because RAPE IS A CRIME! When it comes to sexual harassment or anything about sexual dysfunction, we don't listen, we don't tell. It is personal, private. NO! It is a crime and everybody needs to tell the world. Beatrice was not the first female that the man raped not even close to the first."

"Each case of rape is different. In Beatrice's case, this man was chasing her all the time she was in Washington. Am I blaming her? To a degree, yes."


"The audience seemed repulsed; "People. Please understand that what I am saying here tonight is known by all people in the firm especially top team members I am not saying this to hurt my colleague . This is to make you see and understand what we are saying. The man who raped her stalked her all week. The women who saw the "bad" side of him kept quiet. That enabled him to cause more pain. He used that silence, and his list of victims got longer and longer.

The women kept silent because they did not want to face the attitude that we as a society give them: oh it was nothing.  It was something when Mr. Paige touched my colleague inappropriately the second they were alone. She did not want him. We must allow women to say what they do and do not want men to do to their bodies. We must change the attitude about sexual problems, and we must listen when a women is trying to get a man to stop. When a woman says a man is bothering her, we must hear and make hear and make sure the man understands that he must stop." 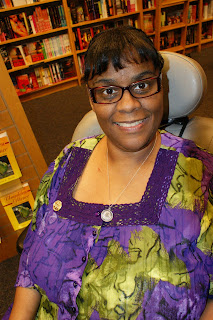 Lydia E. Brew was born with cerebral palsy but has not allowed her physical limitations to stand in her way. Her writing also provides insights into the world of the physically challenged. She graduated from Texas Southern University where she received The Society of Professional Journalist Sigma Chi Citation for Achievement. She was a member of the drama club and pledged Alpha Kappa Alpha Sorority, Inc. Under the leadership of one of her journalism professors, Miss Brew penned her first book Edith, The Story of Edith Irby Jones. M.D. about the first African-American to graduate from The Arkansas School of Medicine. Upon finishing college Miss Brew worked with the Houston Association of Black Journalists. She is a Christian and attends St. Timothy's United Methodist Church

Miss Brew founded Lydia's Educational and Charitable Organization  (LECO) when she decided to encourage young people to write. LECO did this by sponsoring a yearly contest in which the contestant had to write about positive role models who were alive and from the Houston area. Each student who wrote and eligible essay was given a certificate of participation. Winning writers received cash prizes.

Her second book Our Learn Together Book is based on the biography of Dr. Jones. It tells her story in a simplified format on one page and allows the child to writes his biography on the other. There are activities in the back where children can learn developmental skills and older children can learn to do research.