Giveaway of Going Under + Promo 
Brooke Wright has only two goals her senior year at Charity Run High School: stay out of trouble and learn to forgive herself for the past. Forgiveness proves elusive, and trouble finds her anyway when she discovers a secret club at school connected to the death of her best friend. She learns that swim team members participate in a “Fantasy Slut League,” scoring points for their sexual acts with unsuspecting girls.
Brooke, wracked with guilt over her friend’s death, decides to infiltrate the league by becoming one of the “unsuspecting girls,” and exact revenge on the boys who stole away her best friend. An unexpected romance complicates her plans, and her dogged pursuit of justice turns her reckless as she underestimates just how far the boys will go to keep their sex club a secret.
(This is a New Adult fiction book with mature themes. It contains explicit language and descriptions of sexual violence.)

Book Excerpt (from Chapter One):


I left the bathroom in a hurry, turning the corner for the foyer and slamming into him. The force of the hit was so great that I stumbled backwards, nearly falling on my bottom if not for his outstretched hand. I grabbed it before going down and wobbled on my too-high heels, clutching him as I worked to regain my balance.

“God, I’m sorry!” he exclaimed. I looked at his face then, unprepared to see something so beautiful. I think I gasped. And then I averted my eyes out of sheer embarrassment.


“I really should watch where I’m going,” he said.


He still held my hand, and I let him. I couldn’t remember who I was or where I was going. I couldn’t remember where I had just been. I only knew that a very cute boy . . . no, he was more than cute. He was gorgeous. This very gorgeous boy was holding my hand, and I had only one thought. I wanted to make our handholding more intimate. I wanted to lace my fingers with his.

“I think I should,” I mumbled.


I chanced another look at him. I made a conscientious effort not to gasp as I took in his light blue eyes. I’d never seen eyes that color. Bing Crosby had nothing on this guy’s eyes, and Bing’s eyes were the color of the Mediterranean. No, the eyes I looked into now were so light blue they looked translucent. I thought if I stared a little longer I could see right inside his head, to his brain, and I don’t know why that turned me on so much. I wanted to witness the workings of his mind, the firing synapses, information traveling safely inside neurons to different parts of his body. A few made it to his hand, and they must have told him to keep holding mine because he didn’t let go.

He smiled and released my hand. I thought he did it reluctantly, like his brain ordered him to and he finally acquiesced. I smiled back, a flirty grin. I pulled my ponytail forward over my shoulder and played with the strands. I bit my lower lip. And then reality came crashing down like a hailstorm, large lumps of ice banging my head and screaming at me in unison.


I looked at the gorgeous guy, and my face went white.


He stared at me for a moment before saying, “Are you okay?”


I shook my head and started towards the sanctuary doors. He followed behind.

What the hell was I doing? Trying to flirt with a guy at my best friend’s funeral? How could I even forget for a second that I was at a funeral? I was supposed to be carrying around heavy, black sorrow to match my black dress and black heart, not batting lashes and fantasizing about sex with a stranger. Was I so ridiculous that a hot guy could make me forget to have any kind of decency? Or shame?

I rounded the corner and saw my mother waiting for me. And then I ran to her, threw myself into her arms, and burst into a fit of tears.


“Brooklyn,” she whispered, holding me in a tight hug. “It’s okay,” she cooed as she stroked my hair.

“I’m a terrible friend!” I wailed. I saw the fuzzy outline of a boy walking past us tentatively through the doors.

“Brooke,” Mom said. “I want you to calm down. Now, we talked about this. You knew it would be hard, but she was your best friend for all those years. Do you think she wouldn’t have wanted you here?”


“No she wasn’t! Not after what I did! I ruined everything! I’m a freaking slut!” I sobbed, shaking my head from side to side.


“Sweetheart, don’t say words like ‘freaking’ and ‘slut’ in a church,” Mom replied.


I only sobbed louder.


“You can do this,” Mom encouraged.


I stood my ground, shaking my head violently, refusing to go in.


“Brooklyn Wright!” Mom hissed pushing me away and grabbing my upper arm. She squeezed too tightly, and I squeaked in discomfort. There was no more tenderness in her voice.


I swallowed hard and wiped my face.


“Do you understand me?” Mom repeated.


I nodded grudgingly, and she took my hand, leading me through the doors. 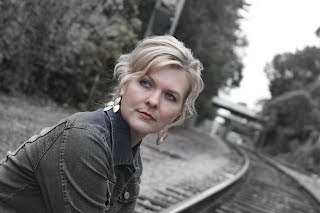 
S. Walden used to teach English before making the easy decision to become a full-time writer. Easy because once she completed a full-time graduate program, there weren't any teaching jobs anyway! She lives in Georgia with her very supportive husband who does not read fiction and has a difficult time understanding why her characters must have personality flaws. She is wary of small children, so she has two Westies instead. Her dreams include getting through her next big writing project (a three-part series) and owning and operating a beachside inn on the Gulf Coast. Her husband's dreams for her include getting her Ph.D. so that he can tell people he's married to
a doctor.
She loves her fans and loves to hear from them. Email her at swaldenauthor@hotmail.com and
follow her blog at http://swaldenauthor.blogspot.com where you can get up-to-date information
on her current projects.