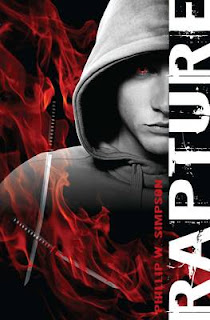 I really enjoyed this book. The things that happened felt so real as if you were in the book also. I seriously thought that Phillip did a fabulous job, I felt every emption, I loved the action parts, the ending was amazing Sam seemed like someone that you would have on your team if something like that ever happened in real life.

The book was fast paced and I was left wanting more because I didn't want it to end. I was stunned by how much detail and information was put into the story especially because it was only 131 pages long. The Biblical and Fantasy parts of the book were really well written it was one of the reasons I wanted to read it and especially cause it got really great reviews!

I usually tend to read books about romance which are almost all written by women so this is like a breath of fresh air, kind of out of my comfort zone. I don't know what else to say about this book other than you definitely need to read it because you are going to love it as much as I did.

There were amazing twists in the book, the fight scenes were tremendous and well done. I'm sure everyone loves a good fight and Sam was a great character he put up a great fight, he wasn't going to give in for any reason. Considering that he was bleeding all over the place in those last couple of pages. Great story and plot that includes amazing characters. I give it 5 stars

Ten things you didn’t know about me:
I used to be an archaeologist and a museum curator
I used to own a comic shop
I did kung-fu for six years
All my tattoos are of comic characters
My son has the same birth mark as me on the back of his head
I was in the army
I’ve walked to Machu Picchu in Peru and trekked in the Himalayas. I also ran with the bulls in Pamplona!
My most favorite noise is rain on a tin roof
My favorite movie of all time is probably the Fifth Element
I’ve been published by several mainstream publishers but I’m now an indie writer for my commercial fiction

Phillip W. Simpson is an author of mostly children's books - both fiction and non-fiction.

As well as being a writer, he is an elementary school teacher. Career highlights include being in the army, gaining a Masters in Archaeology, owning a comic shop, becoming obsessed with martial arts and oriental weapons and turning down a job at the British museum.

His YA novel RAPTURE (the first in the Rapture trilogy) was released Sept 1st, 2011 by Pear Jam
books. RAPTURE is a dystopian/post-apocalyptic story about the end of the world featuring demons,
angels and a half demon protagonist caught in the middle. RAPTURE was shortlisted for the Sir Julius
Vogel award for best Youth novel.

On a personal note, he is married to Rose, has a son (Jack) and two border terriers, Whiskey and
Raffles. He loves fishing, reading, football (soccer) and single malt Whiskeys.