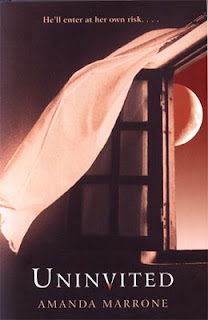 When Jordan's ex boyfriend Michael commits suicide. The whole school thinks he is gone, even Jordan believed it. But oh they are so wrong, Michael decides to show himself to Jordan hoping that once she sees him alive they can get back together again. All she has to do is open the window and let him in. But no she won't it, the creature standing behind her window isn't the Michael she knew this was a vampire. But Michael won't stop, he will return every single night until she opens the window. And if she doesn't her friend is going to pay.


I didn't really enjoy Jordan's character I guess it was mostly because she was drunk more thank half of the time. I would have liked to read more about her when she was sober and really understand her. But I do think that there was a lot more the author could have added to her, personality wise. I liked Michael he was the villain from the book. I think in my opinion this could have been a better book if there was a bit more action to it. Nothing really happened up until the last couple of chapters from the book. It was kind of a short book but I couldn't really get into it, but other than that it was an okay of a book. It did have a good storyline to it which made me decide to get the book in the first place. I don't know if I would recommend it but if you want to read it that would be great. I hope you enjoy it.
Posted by ana at 6:09 AM