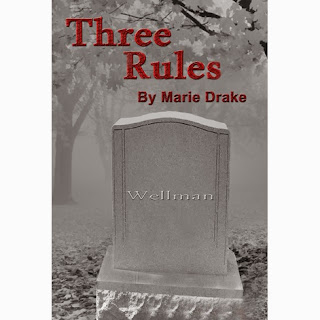 “I have learned three rules in my life: 1.) The most dangerous people in the world are not always strangers. 2.) The scariest things imaginable are not those that can kill you, but those you can live through. And probably the most prominent: 3.) The most horrible possibility is not what could happen to you, but what you could become – I became a killer.”  ~Hope Wellman

Brief description of the novel:

Hope Wellman has a childhood full of horrific memories, a bone chilling recurring nightmare, and a persistent paranoid sense of being followed that she would rather keep repressed. Is evil reaching from beyond the grave to capture the tattered remnants of her soul once and for all, is it only a machination of her disturbed mind, or is there something happening more sinister than even she can imagine?
Attending the funeral of her abuser is the first step in putting her life back together. She struggles with the fact she never told anyone what happened to her, and that the grave they are mourning over is empty. She'd find it a lot easier to move on and believe in the future if he were in the box, ready to be covered with dirt. She fears the last thread of her sanity has snapped when she sees him everywhere she turns, and can't escape a recurring nightmare. Is her tormentor alive, or is she imagining it? Is her dream triggered by past fears or is it a prediction of the future?

Holy cow where do I start. The storyline was fantastic, I enjoyed a lot more than I thought I would! The characters were amazing, Joey was my absolute favorite. The plot was some what unique. Not only that but the author did a good job with all the twist and turns. Throughout the whole book all you kept wondering was who did what, and is the bad guy really dead?. Almost everyone in the book had hidden secrets. I think the only one who didn't was Joey and Harvey. Lucas was a great character and so was Luther. Hope was so brave she wasn't going to let anyone hurt her ever again she fought for her life. The relationship between her and Joey was well written, it never got to the point where it was to fast I thought it was done slowly to the point where you could fall in love and get to know the two main characters. Honestly their friendship bloomed into something so beautiful and unexplainable. There was tons of Drama, action, and romance. But in a way I felt like Hope and Joeys' romance needs more spark.. Other then that I loved this book. It was just what I needed. In the end I kind of wished there were more pages so I could continue reading but there wasn't. I give it a 4.5 out of 5 stars.... Oh how I wish Joey wasn't a fictional character. ;)