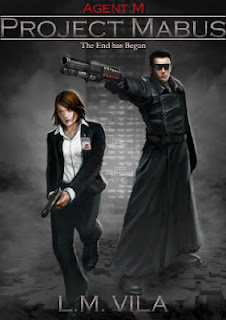 After succeeding one of his biggest failures Dr. Donald Viseman has now created the thing he has been wanting the most, a human soldier. One that he created to never be bothered by any weather condition, and will be stronger, smarter, and faster than any other human being. As soon as the child is born a government operative soon comes and kills everyone except Donald. Cause the government doesn't want anyone knowing about the existence of what they call "Project Mabus." When Mavryk who is Project Mabus, tries to escape his boat blows up which makes Donald and Nicole believe that he is dead. Years later FBI Agent Michael and his new partner Meryl are trying to find the people who are responsible for trying to kill him. Because they are the ones who are trying to sell Project M a drug made from the same formula that was used to make Mavryk.


The characters in this book were amazing and I especially liked Meryl we were so much alike personality wise and thats why I was kind of attached to her more. She was really witty that is another thing I liked. Michael seemed like a quiet guy who keeps to himself and it was like he really intimidated his other coworkers. He was a badass, but at the same time he was also really nice cause you could tell that he cared about Meryl more than he led on to believe. I really enjoyed reading about Mavryk the way they described him in the beginning made it sound like he was a superhero. I did enjoy the book it was very scientific in a way which i liked cause i don't really read many SciFi books. I liked that the author described things with so much details that he made it sound so realistic but it wasn't to overwhelming. I know that sometimes authors give so many descriptions about places or people over and over again and then you start getting annoyed with everything that you end up hating the book. Kurtis was one of those villains that you love to hate he filled you with rage, and thats what villains are all about. He sounded so stuck up and he thought he was better than anyone else thats the only thing I didn't like about him. That why he made a good villain. But L.M Vila did the opposite he made everything sound so intriguing and it makes you want to keep reading.
Posted by ana at 5:08 PM