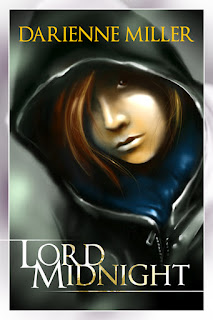 I got this book to review from http://www.dorrancebookstore.com/

Muriah has been having weird dreams, she doesn't understand what is causing them or why. She has the same one every night and Lord Midnight is always in them. Those restless nights haven't been helping her either, she doesn't turn in her assignments and she is losing the only friends she has. Aaron and austin. Now she has found out the truth that Lord Midnight is after her and she doesn't know why. Muriah wakes up and realizes that she has been kidnapped by the Morgan's who have also been in her dreams and they had helped her escape from Lord Midnight. They are the only ones that know what is really going on, and as soon as she finds out she wishes she hadn't asked in the first place. All she is hoping for is that it could all be a dream and she can wake up and forget it even happened.


I loved Aaron and Austin they had such a great attitude, they were really quirky, and funny and I liked that about them they made me laugh so much. I liked Muriah's character but I kind of thought she whined to much and that she was a bit to immature. I mean I get that she was freaking out about everything but i really did think she had an anger issue. But I did like the story line from this book I thought it was amazing. It had so much action and suspense in it. I enjoyed learning about Lily, Jayk, and Haley I loved them so much they really helped Muriah alot. They were the ones there helping her so I really liked them for that they were nice. I do think there could have been more added to this book but I did pretty much enjoy it.
Posted by ana at 2:45 AM