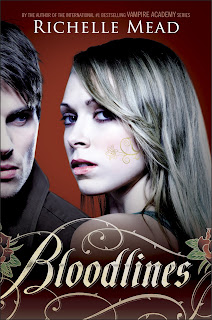 At first i didn't think that i would like this book as much as i loved The Vampire Academy and i was rereading all the time cause i just never finished it cause it was a slow book and when i did finish i just realized that i could have gotten through it if i would have tried not rushing through it, in the end i did like it alot i was glad that Richelle included a couple of the old characters in this book.

So the book is basically about Sydney the alchemist that helped Rose in the Vampire Academy series. Sydney is once again helping out the Vampires by guarding Lisa's half sister Jill dragomir because other moroi vampires are trying to get rid of her, they know that without her Lisa can be uncrowned as Queen. So a guardian comes along to keep Jill and sydney safe from other moroi coming to get revenge so they move to california and act as if they're brother and sister. While getting Jill into a human school where they know that no one will come after them if they're hidden in the hottest part of California. They realize that someone is killing moroi vampire by drinking they're blood. Then they find out that someone is betraying them and giving tattoos to humans to make them faster and stronger but the effects don't last long. Sydney finds out that not everyone is who they think they are and she finds out the Secret that Jill and the moroi are hiding from her. One wrong move and being an alchemist will be history. She has to make everything better before it gets worse. Because as soon as she messes up not only will she be let go but her younger sister might end up replacing.
Posted by ana at 3:54 AM