Nights In Rodanthe By Nicholas Sparks 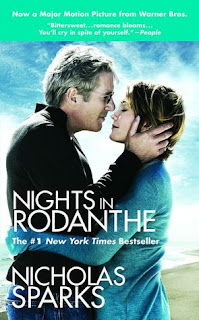 So this is one of those books that you either love or hate. And that's because it's a sad book it has romance and family situations.

First off it's a great book charming and I've never really read any books like this one.

Basically the story is being told by Adrienne Willis a divorced mother of 3 she is telling her daughter Amanda about what happened while she was in North Carolina. Adriene who goes off to a place called Rodanthe, North Carolina where she meets Dr. Paul Flanner who is also a 54 year old divorced man who has retired he went of and sold his house just to leave on vacation to visit his son Mark in Ecuador. While he is in Rodanthe he starts getting to know the person in charge of the place where he is staying at which is Adrienne and then they fall in love. She starts to realize that this is the man that she wants to spend her whole life with and he feels the same when they finally get to know each other they realize that its already time to say their goodbye's cause its time for him to leave. Once he leaves she knows they'll cross paths in the future it was fate. The story was great it was kind of slow in the beginning but then it started getting easier to get into it more. Adrienne told that story to her daughter cause Amanda was suffering from her husbands death and she wanted her daughter to know that Adrienne had gone through the same thing and that people can get through a tragedy, even when tragedy happens you got to know that you can get through it day by day. That she can be happy even when things are rough. Definitely pick this book up its such a beautiful story and sometimes there's not always a happy ending to life.


It was such a sad story. You get to know about Adrienne and her daughter a lot in this book. There aren't really any other characters in this book only for a brief moment her son does make an appearance briefly and also Paul and his son when she was remembering and telling her story. Both have gone through so much so it was good not reading about a million other people. I really liked the book and I hope you guys do too!
Posted by ana at 3:38 AM