At First Sight By Nicholas Sparks 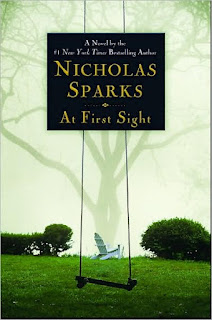 The relationship that first started in True Believer has now progressed between Jeremy and Lexie. With only just a couple of months away from their wedding, Jeremy decides to leave everything behind and move to North Carolina to move in with Lexie. His friends and family don't really understand why they're rushing into things, but what they don't know is that Lexie and Jeremy are hiding a secret from them. And when Jeremy realizes that he has to get his own place because Lexie doesn't want anyone to know that they've been together intimately. That's when the problems start happening not only does that frustrate him but to make it all worse someone has sent him an anonymous email, that raises suspicion and causes Jeremy to doubt every single thing that Lexie has ever said.

Jeremy is an amazing guy truly amazing. He is really sweet and loving but when his trust gets tested he changed a lot It was understandable hearing gossip like that and seeing Lexie with another guy caused him to cross the line. His relationship with Lexie had ups and downs who's doesn't. They had to go through a really tough time, things were said but none of them actually meant it. But in the end they made it through all the pain and hurt. Their love was like a fairy-tale at first planning the wedding getting a new place it was the an astounding love story.


Lexie hmm well most of the time I loved her and the rest of the time I saw her as a liar, not because she was but I felt like she wasn't exactly honest with Jeremy. I didn't know what to think I didn't know if what the email said was true or if someone was trying to ruin their marriage, but when Jeremy was trying to figure out who sent that letter to him I was pointing the finger at everyone. Once I was done with the book I felt so sad everything got straightened out, but my heart was breaking for Lexie and Jeremy more for him though because he went through such a terrible tragedy and he had to learn to love again that which he was angry at the most.


What an astounding inspirational book. I was really taken aback, right when I think that Nicholas Sparks can't possibly top any of his books he does it again and again each time a bit different but with similarities. I really enjoyed this book it didn't take me that long to read it. I have to admit though when I started this book I was a skeptic I didn't think that it was going to be as great as it was. Going into the book was hard I just couldn't get into the story. I was maybe 45 pages in and I was almost about to just give it a rest and read another book but I hate doing that. After reading about 9 of his books you might know that each of them is a bit on the slow side before you get into the storyline. But in the end his work always amazes me.