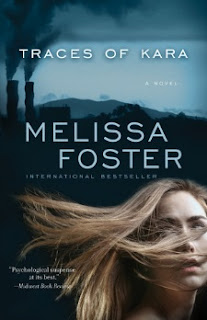 Kara Knight can't wait to leave her hometown for the promise of nursing school and a fresh start on her future--leaving behind an over protective mother, a broken heart and painful memories. However, twenty-five miles away, the brother she doesn't know is determined to be reunited with the sister he cannot forget.

Kara is abducted and thrown into her obsessive captor's delusional world. As the past she thought she knew unravels around her, Kara struggles to make sense of the memories that come creeping back, threatening her sanity and her safety. Meanwhile, Kara's mother races against time to save the daughter she fears she will lose when a long-held secret is revealed. The hours tick away as Roland plays out his plan--to take Kara with him into death at the exact moment of their birth, never to be separated again.

TRACES OF KARA is an action packed, pulse pounding psychological thriller/suspense novel that features a determined killer who slowly loses his grip on reality as his carefully detailed plan starts to fall apart and a heroine determined to move forward with her life who now must reconcile everything she believed to be true about her family with the reality of their tragic past

From start to finish the book had me hooked, especially when the author puts so much detail into it without overdoing it. Almost instantly you start feeling compassion for the main character who has an unsupportive parent that would prefer her daughter be married to an unfaithful husband than keep pursuing her dream of going to Nursing school. The book itself is fantastic the mystery, the different point of views pretty much everything about it is so intriguing

The characters were amazing as well not in a they were sweet and nice kind of way but they were interesting and they kept you at the edge of your seat. My favorite was Kara, because she was trying to live her life and she didn't want anyone living it for her. She was going to continue going to school because it was something she loved doing. She was a tough chick in my opinion. Especially when it came to that Dean guy.

I absolutely hated her ex husband he seemed like a loser, if I was her I would have left him too. No one should be with a guy like that. And Roland I still don't know what to say about him he seemed like such a weirdo, but I kinda understood why he would do something so creepy. She was the only one that treated him like he was a normal person. The book was incredible I enjoyed it so much, definitely worth reading!! 5/5 stars

Melissa Foster is the award-winning author of four International
bestselling novels. Her books have been recommended by USA Today's book blog,
Hagerstown Magazine, The Patriot, and several other print venues.
She is the founder of the Women’s Nest, a social and support community for women, the World Literary Café. When she's not writing, Melissa helps authors
navigate the publishing industry through her author training programs on Fostering Success. Melissa has been published in Calgary’s Child Magazine, the Huffington Post, and Women Business Owners magazine.

Melissa hosts an annual Aspiring Authors contest for children and has painted and donated several murals to The Hospital for Sick Children in Washington, DC. Melissa lives in Maryland with her family.
Authors Links:
Website
Twitter
Facebook
Pinterest
Goodreads

The author is requesting reviews are posted on Amazon and Goodreads and the link shared so that she can promote.
There is a giveaway linked to this tour of one paperback copy overall which will be mailed to the winner direct via Amazon.  The giveaway will be structured via Rafflecopter (link to follow) and entrants will have the option to like Melissa’s FB fan page, follow her on twitter, and also tweet about the release (link to Amazon on tweet).
Posted by ana at 8:42 AM